Unfortunately in only two years, without the National team participating in World Championships or at least in qualifications, the development progress has regressed. Players, even those playing on weaker caliber teams, have slowly quit the sport. Government officials found the reason to stop funding the sport. Without National Team participation, there is no reason for the sport to continue existing in Greece, at least in the eyes of the government. The IIHF decision essentially handed them the keys to frankly try and eliminate the sport in our country.

National Team participation always gave us an upper-hand when it came to negotiations. Greece participating in World Championships always gave the Team Leadership [Coach, manager, Captain, etc.] the ability to advocate for the National Team, the power to knock on doors and have people listen. We were able to get funding and support for the team. It wasn’t easy but we always had the World Championships as the goal, the reason, our own Stanley Cup if you will, to assist in the process. Despite all the negative effects that the IIHF decision has caused, Greek Ice hockey continues to exist. The sport is still being developed and the number of registered youth is increasing year-over-year – Not at the same rate it was when the Men’s National Team was participating, but it is still growing after a small drop in numbers after 2013. We are still alive albeit perhaps on life support, but a weak yet determined heartbeat is still there.

But in order for this heartbeat to continue to beat, we ask the IIHF to re-evaluate this decision. We might not have an Olympic size rink, but we do have 3 permanent ice rinks where the sport in being developed.

We need the IIHF to use Greece as an example to apply facets of its own Mission Statement – “To Govern, Develop, and Promote hockey throughout the world”.

It is critical that the IIHF please take into consideration that our National Team needs to participate in International competition. This is imperative in order to keep the sport alive so maybe one day we can see an Olympic size rink in Greece. What a success story that would be — one the IIHF could proudly claim as a shining example of its governance and benevolence that helped grow the sport of hockey around the world.

IIHF participation cannot be based simply on infrastructure. Yes, there are other factors in the Bylaw as well, but infrastructure is the element that cancels everything else if not existent. (i.e It seems that, if you have an Olympic size but only have a 3-team national league, you will be permitted to participate in IIHF World Championships, even though a 4-team league is the minimum).

This is why we are proposing the “Point System methodology” that we believe can help all Nations of lower division’s progress, develop and grow ice hockey in their respective countries.

Having infrastructure as the main guideline for participation does not motivate the countries to develop the sport further. Researching information available online clearly demonstrates that many nations are re-assured that their participation status will not change as long as their Olympic rink is operational, even for a few months during the year, making the progress of the sport stagnant or very slow.

As we stated above, we’ve noticed that a couple of countries do not seem to have  a 4-teams national league or Cup, but participate in IIHF World Championships. Please keep in mind that the information collected was very difficult to find. Many official websites did not contain the necessary data (or data was incomplete) and others simply didn’t exist. Apart from the official country websites, we also used other resources (e.g www.eurohockey.com and www.eliteprospects.com) that might not contain accurate data, which we apologize for, but this doesn’t mean that the final conclusions are not the same.

The Point System is a methodology where developing Nations (from Div.II, Div.III and under) will have to respect in order to participate in the IIHF events. Countries will gather points based on different categories that the IIHF will decide upon and only if they gather the necessary number of points will they be permitted to participate. Categories can be: Ice rink, Men’s League, Woman’s League and so forth. Categories that the IIHF can modify as time progresses. All countries will gather points, and even if a country does not have an Olympic size rink, but is developing the sports in other aspects they can still participate, as long as the rink has been approved by the IIHF. As time evolves, the IIHF will announce the increase of the total points gathered that will be necessary for participation, making all countries obliged to develop other facets of the sport. This way countries will have to develop the sport as a whole as years go by. They will have to develop youth hockey and woman’s hockey for instance if the points they gather do not suffice for participation.

Below is a screen shot of the excel file with the Points System. This methodology is just a draft. It can include more categories, other point-values, and in general become a tool for the IIHF to Govern, Develop and Promote ice hockey around the World, by monitoring the progress of each country, setting milestones and tangible goals for all countries. 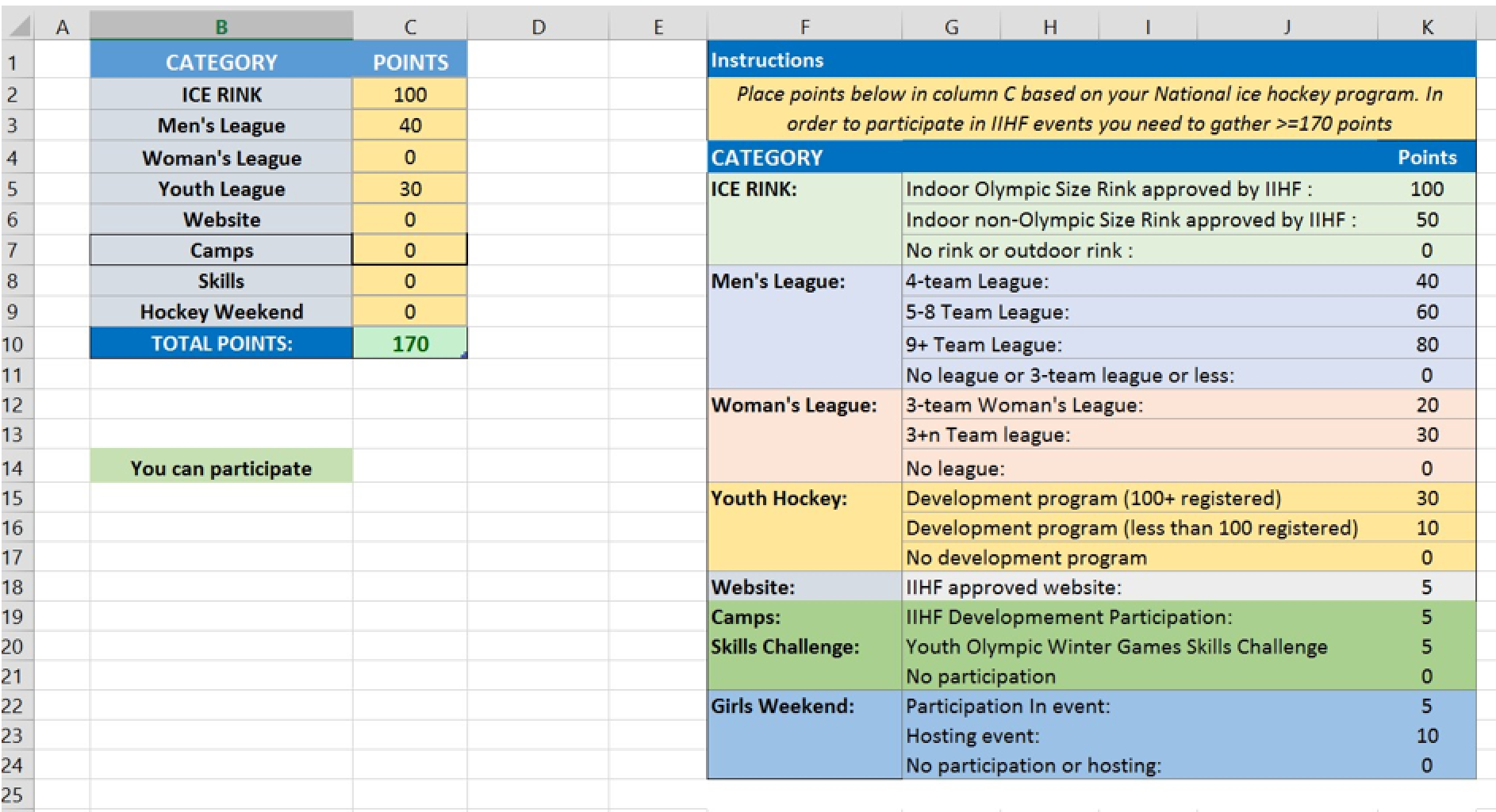 We are trying to develop the sport and the only thing that is missing from Greece is a few meters of ice. You noticed in the above graph that Greek ice Hockey grew in recent years, despite having a smaller size rink, and the only decision that halted this progress was the removal of our National Team from International competition. As we already stated, we need our National Team to participate. Our National Team is the foundation of the whole sport and only with participation can we one day have the Olympic size rink that we need.

We understand that removing us from the World Championship was a decision based on the belief that this will pressure our government. That maybe the threat of non-participation will force them to open an Olympic rink, but as you’ve seen, it had the opposite results. It actually helped the government by making their decision to eliminate ice hockey easier. Without participation of our National team, there is no point in the existence of the sport.

We would be in total accordance with the IIHF decision for removal of Greece from international competition if we didn’t have any facilities or the sport was not being developed. But this is not the case, there are permanent facilities, businesses owned by former players, and the sport was being developed with surprising increase of player registration, which was only halted by the removal of our National Team. Greek Ice Hockey was developing in all categories since our National Team qualified for the World Championships back in 2008.

Even traditional ice hockey nations like Canada is struggling in player registration lately. Of course, we are not comparing to Canada in any way, but this only proves that all countries are struggling with the development of the sport.

It’s been a constant up-hill all these years, but we continue our efforts to progress the sport as best we can. We feel frankly that we are progressing at the same rate, if not a greater rate than teams participating now at the Division III championships.

We are not here to criticize but to offer solutions to the IIHF that can be applied to all Nations. A more detailed system with tangible objectives for all countries to follow is a more prudent rule.

I hope you take the time to examine our proposal and decide to change this Bylaw, helping us keep ice hockey alive in Greece.